For an average car driver, the suspension doesn’t mean a lot. A decent balance between comfort and handling is something that meets demands of ordinary men. On the other side, there is Eibach, a company that was founded because of that small percent of people who want to get a maximum from their cars. Sports suspension has always been challenging for many manufacturers. So, instead of in-house development, they turned to renowned manufacturers of these components. Eibach is among elite companies in this segment of the automotive industry, so its participation in pretty much all prestigious racing competitions around the globe is not wondering at all. Dakar, Le Mans, F1, WRC are just some of them. Thanks to companies like this one, such racing-oriented suspension products are available to ordinary people as well.

When you think of sports suspension, things like F1, Le Man and similar competitions always come first to your mind. Still, engineers from this manufacturer have the same enthusiasm when it comes to the off-road drive. So, there is a great palette of products designed for these driving conditions. Trucks, SUVs, Utility machines, Eibach has the solution for all of them. Of course, the focus is on performances. Besides those “universal” components, this company has also developed a suspension designed for Jeep’s legendary models – Grand Cherokee and Wrangler.

Imagine Jeep’s flagship model even more capable. That would be amazing for sure. So, there is a special “Cherokee kit”, which includes all necessary components to bring your Grand Cherokee to the completely new level. All-Terrain-Lift Springs by Eibach will give superior stability and make your SUV significantly more capable. Additionally, there are Eibach Pro-Truck Shocks, with a classic monotube design, with Nitro-Coated Rods and Powdercoated Shock Bodies. Of course, this kit also features brand’s famous Million-Mile warranty. 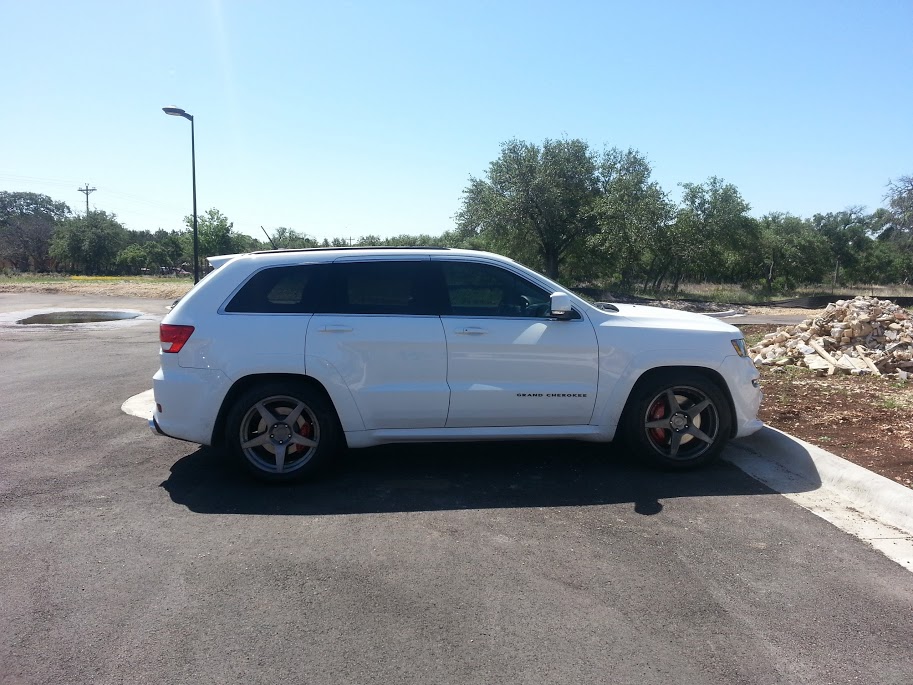 The same thing is with the iconic Wrangler. With this kit, designed especially for the legendary WW2-inspired SUV, you can count on far better performances, comfort and stability. It consists of similar components as Grand Cherokee but adds things like bumpstops, spacers and numerous other components that are highly adjustable. You can spot the difference from the stock model after only one quick look. Once again, count on Eibach’s Million-Mile warranty/two-year shock warranty.

They have free shipping and great service.

Less than two weeks is left  before one of the world’s biggest car shows  will be open. The Geneva Motor Show has been one of the major shows for decades. Moreover, it lasts for more than a century and we are pretty sure that it has hosted almost every important car model in the history. With such reputation, this show is important not only for major car makers but pretty much for all companies that have something with the automotive industry. As one of the world’s leading companies when it comes to suspension, KW is a regular participant of this show for decades. Every year we see something new from the manufacturer, presented originally in Geneva.

For the 2017-year show, we have seen some pretty amazing presentations at the show, so we don’t expect anything less for this year. We all remember Porsche Cayman GT4 from the last year, fully equipped with KW products. For this occasion, we are about to see something even more amazing, a Mercedes-AMG GT4. The upcoming car show is scheduled for the March 8th. A new 4-way damper adjustment with 18 clicks is probably the most important thing installed on this race car. With such number of adjusting options, these dampers could be a perfect choice for every sports or racing car. If we consider that many renowned carmakers like BMW, KIA, Mercedes, Opel, Porsche and others already cooperate with this manufacturer, be sure that this product will become an integral part of many future models. Of course, many other newest developments will be presented at the upcoming show.

KW’s sub-brand will also participate in Geneva. This brand is a part of KW automotive group and it is also a brand with an excellent reputation. Its products are integral parts of many famous car models. It is enough to say that the legendary Subaru Impreza uses ST Coilover suspensions for more than 25 years. A popular crossover Hyundai Tucson also uses ST suspensions. Finally, Alfa Romeo Giulia Quadrifoglio comes with ST’s sports coilsprings. For the upcoming show, this company has also prepared some nice novelties – new technologies and design solutions.

Getting best-possible performances includes suspension tuning as one of the essentials. For decades, engineers work on new technologies that will improve your car’s handling and overall performances. Some of those new design solutions are adjustable coilovers. This is probably the best solution for suspension tuning. Finding perfect height has never been so easy. These coilovers are available on the market for about 25 years and they are definitely the easiest and most convenient way of lowering your car.

Still, there is one important issue – price. These kits are usually expensive, especially if they come from renowned manufacturers. However, you can also try some cheaper variant that could give you a great value for the money you pay. AP is definitely a company that meets these requirements. This company was founded by the small group of enthusiasts not so long ago. Still, they’ve managed to establish a nice market position in a pretty short time. Today, this company belongs to the group of those manufacturers who offer a great balance between price and quality. They have a wide palette of products, including lowering springs, complete suspension kits etc. Still, AP Adjustable Coilovers are probably their best-known product.

Affordable and reliable, these coilovers would be a great choice for all those who don’t want to spend a huge amount of money. Benefits of this product are numerous. After installing them, you will get a wide radius of adjustment. The highest setting will lower your car to about 30 mm, while the lowest setting could go over 90 mm. All components of this product, including springs, shock absorbers, dust guard and bump stop, are made of high-quality materials. AP gives a 2-year warranty on this product. Another important thing to mention is that damping level has been increased by about 30%. Basically that means it provides  great balance between comfort and performances. The ride will be firm, but not hard at all.

This manufacturer has developed adjustable coilovers for various models from the most of renowned carmakers. These products could be installed on many models of manufacturers like VW, Toyota, BMW, Audi, Honda, Mazda, Peugeot, Citroen, Fiat, Ford and many others.

We will start this article with a presumption that you know some basic things about drifting. Just like many amazing things in the car industry, this one also comes from Japan. Original drift races started in the country of the rising sun back in 70’s. Today, it is definitely one of the most popular disciplines. Reasons are numerous, but the main thing about drifting is that everyone can learn to drive in this way. It doesn’t matter at all if you are amateur or a professional driver, everyone can enjoy this amazing motoring discipline. Still, you should get a proper car and here is a short list of cars that are perfect for drifting:

Do not be confused by the  long name. This is definitely a perfect drifting machine. Originally introduced in 1983, this model features all drifting essentials – lightweight, enough power and RWD layout. Initial models featured a max output of 130 horsepower, but later versions were tuned down to 120, so consider some engine tuning. It is a cheap and reliable car, hugely popular among drift enthusiasts.

The iconic sports coupe/convertible was in production between 1978 and 2002. Best known for its revolutionary Wankel engine, this car is not only highly capable but  looking pretty as well. Still, its rotary engine is its key trump, since it provides plenty of power and amazing throttle response, crucial for drifting. The third generation of this model is especially interesting for car enthusiasts since its engine delivers 280 horses in the stock version.

This is definitely one of our first picks. This sports car was in production between 1989 and 1998. For all those years, there was a choice of two engines. A base 1.8-liter unit delivers around 175 horses, while a 2.0-liter unit is good for about 205. Combined with light chassis, both models offer amazing acceleration, especially the second one, which needs less than six seconds to reach 60 miles per hour.

The ultimate street racer Toyota Supra could be an excellent choice too. This car was produced for many years and all versions are good for drifting. Still, the last generation, produced between 1993 and 2002, would be our first choice, mostly because of its monstrous twin-turbo six-cylinder engine.

We won’t waste too many words on the probably most iconic street racer of all time. Originally launched in 1960’s, this nameplate is best known for its later versions from 80’s and 90’s. There were several engines in the offer, but you should definitely go for a 2.8-liter inline-six unit. This engine has an amazing tuning potential, so getting 1000 horses won’t be a problem at all!

As you’ve probably noticed, Japanese models dominate this discipline, but Europe has some tough players as well. The most common European car in drifting is probably BMW Series 3 (E30), but Alfa Romeo 75 is also very popular.

Here at Mondeo Spares, we provide genuine Ford parts, which have all been tested in working vehicles, so you can have a Ford spare part that you trust. We sell a wide range of Ford spares, not just Mondeos. So if you need an engine for a Focus, or an alternator for a Fiesta, we can supply it.

We are one of the largest breakers of MK3 Mondeos in the country, so we have stock constantly coming in. So even if you have a Ghia X or an ST and can’t find the part you are looking for online, then please give us a call, as we may have it on site or know we have it coming in soon. We also offer an injector reconditioning service, so that you can keep your own injectors saving you the cost and hassle of having them re-coded.

We do our upmost to get your order dispatched the same day for you and will ship it worldwide. All our spares come with a warranty, going up to 12 months for some parts.

If you need any help, or just have a question about any of our Ford spares, then please give our friendly staff a call on 02892 67 68 31 . We also have a store in Lisburn, if you want to come down and see the part for yourself. You can find our address and a map in our Contact Us section.